When you think of Europe, Germany may not be the first country to come to mind but when you put on your finance glasses, they have no competitors in Europe. As one of the most economically-aware countries, Germany is forging ahead once again with new-age payment and cash management methods. For a country where people’s payment preference is still cash, online payment methods have taken second place quickly. Today, they are using online money more than ever and it seems as though, soon, e-money is going to rule the country. This may sound natural, but when you look at the country’s relationship with money you can see that there is something going on here. The key is gaining people’s trust.

Looking at the chart, we can see that German people seem to restrict their spending to what they already have, instead of getting into even the smallest of debts. They want to stay on solid ground, and they make their choices based on trust. When you look at the graph, you can see that the German population prefers to stay away from credit cards. In an environment like this, a relatively new financial solution like online money has become the norm faster than expected and the leading forces behind this exciting transformation are telecommunication companies. The most trustworthy and industry-leading telcos, such as O2, Vodafone, Deutsche Telekom, Telefonika, and Orange have massive market shares in the country.

Online Payment is Huge in Germany

Germany holds fifth place in terms of the popularity of online payment in Europe, but it is an entirely different case to the rest of the continent. Unlike many other European countries, the German population generally avoids using a credit card, or a debit card even. PayPal is still one of the most popular payment methods for Germans, and the shares of other prepaid services are rising rapidly. Another rising trend in Germany are mobile payment services. eMarketer’s chart from 2019 predicts an exponential rise, but according to the latest news from the country it is safe to say that the pace of the mobile transformation will be faster than expected. 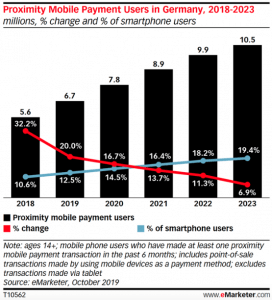 Beginning this month, DIMOCO, a provider for direct MNO connections in Europe, announced German telecommunication companies Telefónica Germany, Telekom and Vodafone to be used as payment agents. According to Total Telecom’s article there are over 140 million mobile subscriptions in Germany, which, when you consider the population is 83 million people, puts telcos in first place in terms of consumer reach. The same article also shows us a clearer picture of why mobile payments will dominate the German financial market soon. There are 40 million people who own a credit card in the country, and 23 million people hold a PayPal account. However, when we examine the Bearing Point chart, we can clearly see that credit cards are only used for emergencies, instead of being relied-upon payment methods.

Since the beginning of the COVID-19 pandemic, the volume of online shopping and online fund transfers have skyrocketed. Thankfully, brands have adapted to this new normal quickly with user-friendly shopping methods, and it doesn’t seem like we are going to go back to the “old normal.” Even for a cash-first society like Germany, it seems like the rising trend for online money will continue.

For online transactions, payment services like PayPal have always been the first choice for the German population compared to credit cards. Now, there is something even more approachable, trustworthy, and easy-to-use available. With telecommunication companies entering the market, German people have found a new and reliable way to make their transactions. The reason is obvious. These decades-old companies that have never failed their customers in terms of connectivity offer the German population what they need most: safety and trustworthiness.

Coming from a tradition that values cash as a payment method, the pace of the shift to e-money in Germany is incredible. When we add the newer generations to this picture, we can expect the country to become one of the first ones to adapt to the next financial era.

Telecommunication Companies are the Future Alternative to Banks

Banking systems have been essential helpers to humans for more than a century. Of course, banks are not going anywhere, but they are evolving. Telcos are taking steps to claim a piece from the cake, but we still cannot call this a rivalry. When you look at the bigger picture, the conventional and new systems are helping each other evolve. There is still an immense void that conventional banking systems cannot fill, and the advanced financial technologies that telcos, e-banks, and other new-age financial solutions use are here to help.

According to WorldBank 68% of the world population remains unbanked or underbanked which is a great opportunity for telcos, thanks to their immense customer reach. In the end, the situation is a win-win for both telcos and the end-users. To learn more about why telcos are going to be an important player in the future financial arena, you can read our article. You can also have a look at the rising trend for the fintech arena here.

Here at Thinks Mobility, we have been partnering with telcos, traditional banks, and even all-digital banks to build unified platforms for the needs of the modern-day user. With our tailor-made and highly-customisable MFS and e-banking platforms, companies can join the game one step ahead. You can visit our page to see how our modules can help your business.